Script error: No such module "Infobox". Minecraft is a sandbox indie video game inspired by Infiniminer, written in Java by Markus Persson, commonly referred to by his alias, Notch, and Mojang AB. It features music by C418 and paintings by Kristoffer Zetterstrand. It allows the player to control an avatar that can destroy or create 1 m3 sized blocks on a dynamically expanding map, and interact with the other parts of the Minecraft environment.

This environment which, in addition to blocks, includes plants, mobs, and items. Some activities in the game include mining for ore, fighting hostile mobs as well as creating blocks and tools by gathering various resources found in the game. The openness of the game model allows players to create structures, creations and artwork on various multiplayer servers or their own single player maps. Other features include redstone circuits for logic computations and remote actions, minecarts and tracks, and a mysterious underworld called the "Nether".

A new game of Minecraft.

The player is the person that a user controls in the world. When a user starts a game, the player is put in a world, generated by a random or specified Seed and his Inventory is empty. The player has a health bar with 10 hearts. The player can be damaged by falls, suffocation, drowning, fire, lava, lightning, cacti, falling into the Void and hostile mobs. Damage to health can be mitigated by armor. Health can be restored by eating food, or if difficulty is set to Peaceful, health will regenerate on its own. A player's skin can be changed on the profile page of the Minecraft website.

Blocks are the objects that make up the game's map, and were borrowed from Minecraft's original influence, Infiniminer. There are different types of blocks; natural blocks such as Grass, Stone, Ore, etc. are randomly generated to create a world to play in. There are also blocks that players can craft, such as a crafting table and a furnace. Items can be extracted from blocks by hand or by using tools. Some items are simply blocks in the player's inventory that can be placed elsewhere, while others are used as material to create other blocks or tools. Others still yield nothing at all. Bedrock is the only unbreakable block. 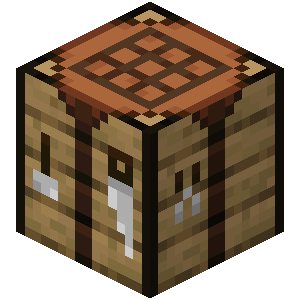 Crafting is how a player creates new tools and blocks using items from their inventory. Crafting was first implemented in Indev, and Notch has expanded the crafting recipes with new versions, blocks, and items. To craft, a player can use the 2 x 2 grid in the Inventory, a Crafting Table, which has a 3 x 3 grid. Smelting requires a Furnace in addition to fuel, and processes blocks, like Iron Ore into a more useful form (e.g. Iron Ingot). 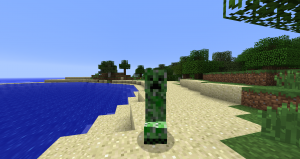 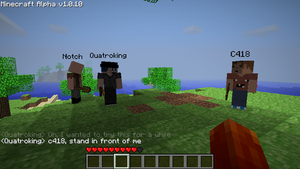 Notch got the idea for Minecraft after playing Infiniminer with other members of the TIG Source forums in 2009.[3] Other influences include Dwarf Fortress, Dungeon Keeper,[4] and Notch's own previous project, RubyDung.[5]

When he first started working on Minecraft, Notch had planned for it to just be a small project. For instance, When Notch uploaded the first YouTube video of Minecraft on May 13, 2009, he had not yet decided on a name, and simply referred to it as a "cave game".[6][7] The name "Minecraft: Order of the Stone" (a reference to Order of the Stick, a web comic and "one of the best things on the internet")[8] was announced the next day,[9] and then shortly after, it was shortened to "Minecraft" as it was much simpler and some people might have thought it was Order of the Stick. The game was finally released for an "early private singleplayer alpha" on May 16. 2009,[10]

The day after the private release, May 17, 2009, Notch released of 0.0.11a to the public[11] and the game received mention on IndieGames.com the day after that.[12] Creative game mode allows you to build/destroy blocks in a manner in which you can build any sort of object you would like. Players are given an infinite amount of each block to build with. Minecraft classic may be played by going to the Minecraft website and clicking "Classic".

Survival Test was released as a free version of Classic on September 1, 2009. It was the introduction of Survival Mode used in Indev to the current Beta. In it, the player now had to mine blocks, face Mobs, and had a health bar. If the player were to die, the map was lost, and unless backed up, the user would have to start over with a new map.

Indev (In Development)was released on December 23, 2009 after Notch received requests to let the community try out new features he was implementing in Survival Test. Indev version 0.31 was put to the public at minecraft.net/indev and available only to people who had purchased the game. When a new game was started, the player would spawn in a prefabricated wooden house. Updates introduced a more complex and realistic lighting scheme than Classic. Indev received more updates after this, adding a few fundamental features to Minecraft as it went. During its lifespan, some updates were devoted mostly to testing new things, like Torches or Fire. Unique to Indev was level types, similar to Biomes and the Dimensions. For example, Floating Islands and the Sky Dimension, and Hell and The Nether. Like Survival Test, if the player were to die, all progress was lost.

Alpha was released on June 28, 2010, and would be many major features to Minecraft. Multiplayer for Survival was created, Redstone Circuits were added to the game,as well as boats, new music, new mobs, Difficulty changing. Most of these features were added without announcement in "Seecret Friday Updates".

The Minecraft Halloween Update on October 31, 2010 was a major update, adding Biomes, The Nether, new Mobs, blocks, items, and other changes.

Beta is the current development phase for Minecraft. It was released on December 20, 2010. Features that have been added include: A new logo and launcher, Achievements and Statistics, Weather, Smooth Lighting, Dyes, More plant types (2 new Tree species and Tall Grass), Wolfs and Squids, Beds, and other blocks and items.

Beta 1.8 (called the Adventure update) is going to be the last major update to Beta, focusing on exploring and combat. Features to be added include new geographic features, a new biome, NPC villages, at least one new mob, new ways to fight, including critical points, and more farming options. In addition 1.8 will include a fully working Creative Mode.[13]

After Beta, it is expected that the full version of Minecraft will be released.

To debut on Sony's Xperia Play Android Phone, and later to be released on the Android Market. In regards to a possibility of an iOS version, Notch tweeted "We'll see!".

To take advantage of Kinect, although optional. To be released Fall 2011.

Minecraft was first made available for sale during June 2009 and has since sold over ten million copies. It has also won numerous awards including: