The Creative mode inventory showing the Building Blocks tab for the PC version.

In Creative, the normal inventory screen is replaced by the item selection screen, which contains almost all blocks and items in a tabbed interface. There is also a search feature. One tab provides a Survival-like inventory, including armor slots (but is missing the crafting grid). Other tabs include foodstuffs, building blocks, Decorations, etc. Some items behave differently than in Survival mode; for example, empty buckets will never fill with water or lava, and water and lava buckets never empty, no matter how many times they are used.

Flying is enabled, activated by double tapping the jump key (default is Space). Use the jump key to go up and the sneak key (default is ⇧ Shift) to go down and the movement keys (default is WASD) to move. The player can disable flying in mid-air by double-tapping Jump again, causing them to drop to the ground. Touching the ground when flying also disables flying. However, getting into a minecart or bed while flying will not disable flying when the player gets out.

Flying very close to the top of a block without touching it will generate footsteps sounds. As flying is much faster than walking, it will generate a lot of footsteps at once. It is also possible to hear wood footstep sounds when hovering right over some non-solid blocks like torches or signs.

The player can obtain items using the pick block key (middle-click by default). Unlike survival mode, the block selected will appear in the player's hotbar even if the block is not already in the hotbar or in the Survival inventory (if it is, then the block will move out of its former slot and replace the item in the active hotbar slot, with the size of the stack preserved). In SMP, any item not in the Creative inventory, including both the items above and enchanted items, will briefly appear in the Creative inventory upon being placed in the player's regular inventory, allowing players to duplicate enchanted items. Creative mode also allows item duplication via Item Frames. When on creative putting an item in a frame doesn't cause it to disappear from your hand. Instead a copy is put into the frame. You must switch back to survival to retrieve the item however (or break the block that the frame is attached to). As a player can easily get most blocks from the creative menu itself this is only useful for enchanted items.

Mobs will still spawn like in Survival (including from monster spawners), but are neutral and will not try to attack the player.

Normally indestructible blocks like bedrock and end portal frameblocks can also be destroyed. Going too far into the Void will still kill the player, but the player can fly around in the Void provided they do not descend below the y coordinate of -64. This, other than the /kill command, is the only way to die in Creative mode.

Blocks that are destroyed by means other than clicking on them (destroying a block it is attached to, or, if it is sand, gravel, or a Dragon Egg and it falls onto any non-solid block) can still be picked up.

If the player is holding a sword in Creative mode, they cannot break blocks.

If the player flies very high above the clouds, it will seem as if there are two suns, when in fact, both the sun and the moon are visible. This is due to the game's limited render distance; changing it will only increase/decrease the height needed to see this.

Some items and blocks are only available in Creative mode, such as sponges and spawn eggs.

In Xbox 360 Edition, creating a new Creative Mode world or opening an existing world in Creative Mode will permanently disable Achievements and Leaderboard updates for that particular game, but have no other effects on gameplay. In other words, Achievements and Leaderboard only work in games that have always been in Survival mode. The inventory in Xbox 360 Edition is the same as the pc version.

To change the GameType in the level.dat it has to be opened with something like NBTedit:

There are several in game blocks that do not appear in the item select menu, including but not limited to:

Note: Using pick block on these blocks doesn't give them except Command Block (using it on Huge Mushroom blocks give the respective small mushroom, farmland gives dirt, using pick block on a portal block, Mob spawner, or Dragon Egg does nothing). However, they can be obtained with the /give command. 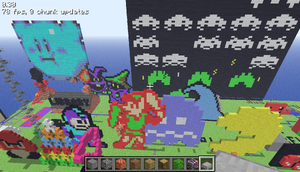 Pixel art made in Classic Creative

Classic Creative can be reached by going to https://minecraft.net/classic and clicking on the 'singleplayer' or 'multiplayer' links.

For obvious reasons, any blocks added in the full release, Beta, Alpha, Infdev, or Survival Test cannot be accessed. In order to play classic creative multiplayer you must be logged into your Minecraft account.

Many of the blocks have been retextured since. Many abilities on servers were lost as Creative and Survival became separate. (/fly, etc.) 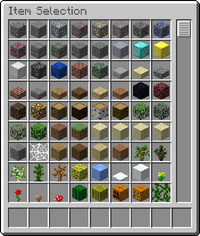 The Creative mode item selection screen prior to 12w21b

Issues relating to “Yaratıcılık” are maintained on the issue tracker. Report issues there.